I should be printing right now 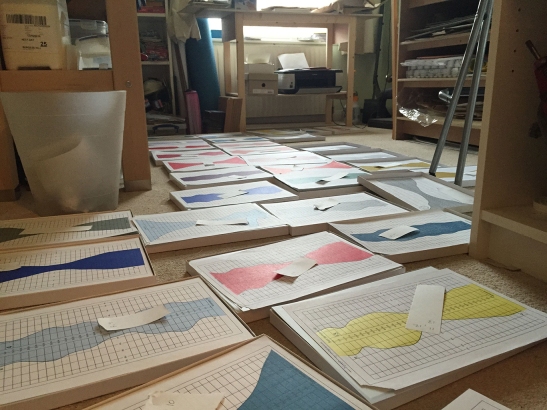 I did it! After months of printing, last week I finally finished printing the last of these 114 shapes. (The paper on the top, by the way, is just a printout that I used for registration. The shapes printed on drafting film underneath that top sheet do not have a printed grid. Just in case you’ve been following this project and were wondering.) Victory! Glory! Relief!

I am actually not finished, and I still have so much to do that I am probably not even going to proofread this post before I hurl it into the world and it will be like that time I wrote that tweet with “it’s” instead of “its” and I was embarrassed all day.

I am rambling because I am exhausted.

After that brief moment of joy and the false sense of completion that crept and LIED to me, I borrowed a guillotine (thanks, Les!) and spent two days trimming all of that drafting film. 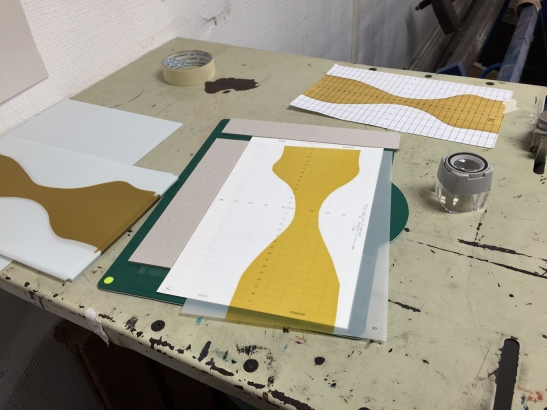 There was this bright, carefree hour a few days ago during which I convinced myself that these sheets might actually look even better if I numbered them by hand, old fashioned style, like some kind of aloof Victorian curator. I even bought a pen. A pen full of hope. But I was full of crap. So now I am printing numbers all day long.

I leave next Friday morning at 4am to go to have an American Christmas in Delaware. And do you know what has to come with me? About a million Kickstarter rewards. None of which are finished. I’d better go.

5 comments on “I should be printing right now”

This entry was posted on December 11, 2014 by Big Jump Press in Work in progress and tagged figure study, I am exhausted, kickstarter, letterpress, population.