Working on prints for the edition

The nut, the stone, the broken key, the cork, the button, the little yellow car, the souvenir, the film, the clothespin and the pine cone.  The objects I have been obsessively making a book about for the last six months. Now that the book is complete, one might expect that I could put these things back in a drawer and move on with my life. Instead, I have shifted from books to prints.

Making prints is liberating after spending months on the book. While the ten prints (one for each object) are related to each other and to the larger book project, they also exist in isolation. This allows me to relax and indulge myself. I can experiment with things that I might have wanted to include in the book but had to leave out, or include things that came about by accident on proof sheets. See below, for example:

This beautiful accident landed on a waste sheet while I was setting up a run a few months ago. I am including this image in the film canister print, in process below: 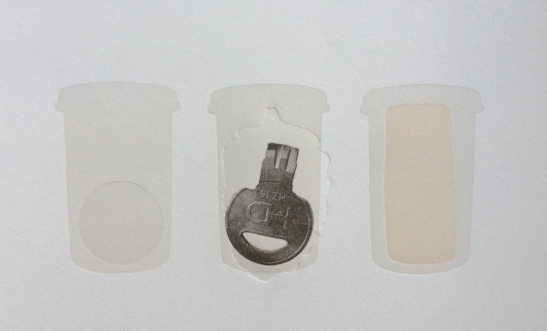 The film canister is introduced in the book with the text “the film is an indication of something else.” This will be the title of the print, and that text will run along the bottom in 14 point Garamond.

Yesterday I set to work on the print for the stone. I am limiting myself to using only the shapes and halftone photographic images of the objects as visual elements in these prints. This time I am beginning by repeating the shape of the stone nine times. I am using the same colors present in the book, colors that I selected and mixed to come as close as possible to the  original objects as I could. The stone is a strange gray-green color that would be quite tricky to match perfectly, but because I am a genius and saved all of my ink from the printing of the book I do not have to mix anything at all. Kaboom. 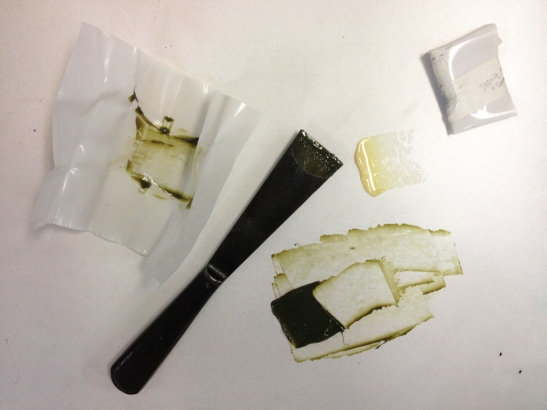 The printing day was a methodical one. I had created a grid of stone shapes in indesign before heading to the studio, and so I had an easy print map to follow. I used the same sheet to lay down the polymer plate over and over again in slightly different positions.

Below you can see where I left it at the end of the day. It is not finished yet; I will be laying down a halftone or two on top. The text for the print will read “The stone is a material thing that can be seen and touched.”

Today I am trapped in the flat waiting for deliveries. More to come on the print front over the next week or so.

7 comments on “Working on prints for the edition”