Announcing a BIG JUMP PRESS KICKSTARTER CAMPAIGN! Give a little, get a lot!

NOTE: this project was fully funded in June! Hurrah!

I am so pleased to announce that (science correspondent and collaborator) David Allen and I have finally launched a kickstarter campaign to raise enough hot and ready cash to buy the materials for our book project about world populations.

We’ve got something for everyone and rewards start at the $5 contribution level. Perhaps you’d like to watch our charming kickstarter video? (Please do! It took me ages to make and I am just a little bit proud of it.)

Here’s some information about the book.
A population pyramid is one of the simplest and most elegant data visualization devices around. Anyone and everyone can read a population pyramid, and through a population pyramid, anyone has the power to draw quick and powerful comparisons of different regions. The vast and critical differences between the basic equations of life in different parts of the world are all quickly interpretable by comparing one shape to another.

Population Pyramids for The United States (left) and Uganda (right)

Dave has created population pyramids for every single region on earth using population estimates prepared by the US Census Bureau, which are available through their International Data Base. We took these pyramids and paired them up to create human-like forms.

We are printing each of these figures by hand onto drafting film, creating layered imagery that is reminiscent of dresses, of ladies, of paper dolls. Giving this data a human shape makes it easier for us to identify with the human beings that it represents.

We’ve designed a box where the figures can be stored and displayed easily and intuitively. Initially, the act of leafing through and experimenting with these figures is playful and investigative. But as a grid buried beneath the hundred or so layers of drafting film is revealed, so is the true origin of these shapes. A narrow waist becomes the absence of the elderly. A boxy figure becomes an aging population.

Mockup for the project

Making a book is an expensive undertaking (the drafting film alone will come to over $2,000) and we are reaching out to you to help us get started. But we will make it worth your while!

We’ve got something to offer at every level of contribution that encapsulates the spirit of this project. From loose translucent figures with accompanying letterpress-printed grids to limited edition prints to copies of the book itself, we’ve got something for everyone, and for a special price at this early stage in the project as a thank you for your help. We would be so grateful for any and all contributions, and if you participate at any level you will receive updates, photos, and videos in addition to your rewards as we work to bring the project to fruition.

REWARD #1
$5 or more  A pdf file emailed to you from David Allen showing layered lines for three figures (six countries). We will keep you updated on the project that you’ve helped to support. Plus a virtual high five.

REWARD #2
$25 or more   Five figures plus a letterpress-printed grid. Each of these (6.25 x 10.25″) figures will be printed on durable drafting film from linoleum. Compare and contrast populations in the comfort of your own home. We will send you a selection of different shapes and colors of figures as well as information to help you identify and interpret them. What insanely good value. That’s just the kind of artist/scientist duo we are.

REWARD #6
$50 or more  Twelve hand-printed translucent figures plus a letterpress-printed grid all contained in a paper wrapper. Each of these (6.25 x 10.25″) figures will be printed on durable drafting film from linoleum. Experiment with layering and interpreting these figures over the grid, or simply on top of one another. Information to help you identify the regions will be included in the wrapper. The image below is a mockup of what you will receive, some small changes may take place in the design. We will include the figure for your country of residence. 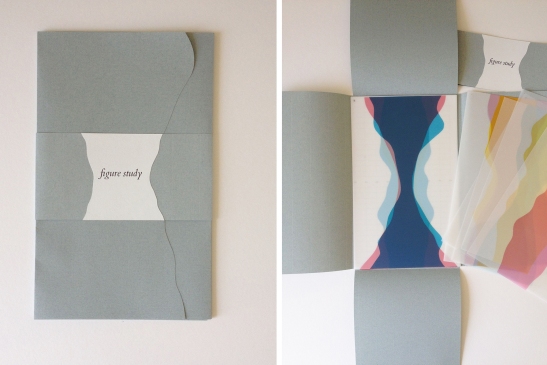 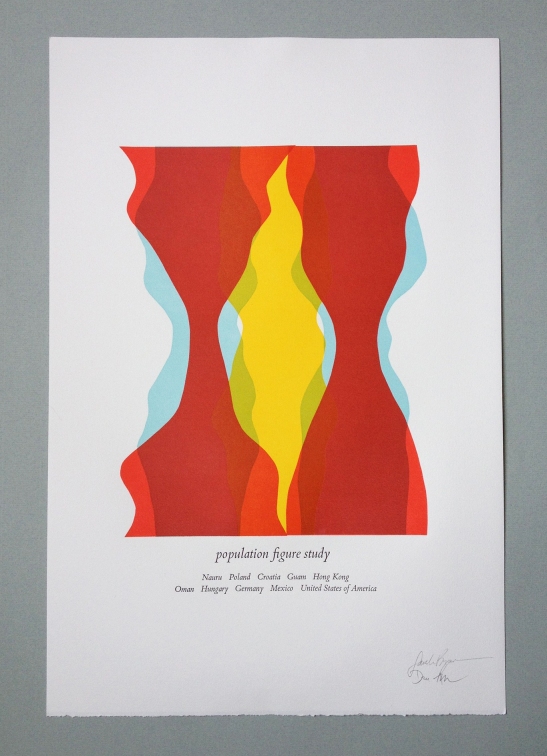 REWARD #9
$300 or more  An assortment of 40 translucent figures (representing data for 80 regions) plus a letterpress-printed grid housed in a luxurious clamshell box with a letterpress-printed grid.  Each of these (6.25 x 10.25″) figures will be printed on durable drafting film from linoleum. Experiment with layering and interpreting these figures over the grid, or simply on top of one another. We will include the figure for your country of residence. The image below is a mockup, your box may vary slightly in color and design.

REWARD #11
$800 or more  One copy of Figure Study, the completed book project. This boxed edition will contain 114 figures that encompass data for every region on earth. Letterpress-printed and hand-bound in Japanese Book cloth by Sarah Bryant, the enclosure will feature a booklet containing a key to interpreting all of the data, a staging area to layer and compare the figures, and a grid inside the box to analyze each shape. A magnet closure will keep the box safely closed for storage. The image below is a mockup, the design and color may change slightly as we refine the design. We anticipate selling this book for a higher price after its completion and official release.

REWARD #12    (I can’t believe I am typing this, but this reward is already GONE.)
$1500 or more  The Holy Grail: (1) A copy of the book with your name printed the colophon, (2) a clamshell box containing 40 figures, (3) all four population figure prints, and (4) twelve figures in a paper wrapper. A contribution at this level will be of invaluable help to us as we endeavor to bring this project to fruition. We will keep you in the loop and in our hearts.

Thanks for reading, everyone. If you know of anyone who might be interested in this project, please send them our way! Tell your friends! Tell your mom! Tell everyone you know!

Thanks and Best Wishes,

2 comments on “Announcing a BIG JUMP PRESS KICKSTARTER CAMPAIGN! Give a little, get a lot!”

This entry was posted on May 11, 2014 by Big Jump Press in Bookbinding, For Sale, Letterpress, Work in progress and tagged artist's book, book arts, David Allen, figure study, kickstarter.