I am finally ignoring everything else and printing this book.

What is this book? A little history: Like many people, I have recently been thinking about the flexible and vulnerable nature of truth. I’ve also been interested in Platonic Solids, a set of five geometric forms comprised of equilateral sides set at equal angles. Because of the regularity of these shapes, they are often used as dice and frequently offered up as examples of fairness and perfection of form. Templates for platonic solids are all over the internet. They are easy to make, but their practical execution will never yield that perfection that makes Platonic Solids so attractive and totemic.

I began making and photographing these solids, first on their own and then later set in elaborate configurations meant to invoke an otherworldly landscape. At the same time, I began to read in two directions. Because Plato wrote about these solids, I started reading his writings, eventually settling (somewhat begrudgingly) into The Republic. After listening to me describe some of my thinking about these solids, an architecture friend directed me to a text called On Weathering: The Life of Buildings in Time, which has a lot of common ground with some of the things I’d been doing in my studio. This in turn led me to Le Corbusier and his designs for modern life articulated in The Radiant City.

Something about Plato and Le Corbusier, two men living 2,000 years apart, each designing a city from the ground up, and using their design as a framework to provide a broad description of morality, seemed to bring this project into focus. Both texts are concerned with the ethics of man (and I do mean MAN, the writing is profoundly male) and yet the arguments they make are riddled with arrogance and do not apply a concept of justice in an evenhanded way.

I began to extract language from both of these sources, eventually combining it to create a text in five parts. In one voice, they propose a new city and describe its virtues. Over the five parts, the city becomes more and more alarming. Here is an excerpt from Part two: The Cities of the world are living in an anguish of uncertainty. There is no freedom for men in this present age, only slavery. The world is sick. A readjustment has become necessary. And now we are, we think, constructing the happy city, not in a partial way by making happy a few people in it, but by making the whole city happy. It will be technical and rigorously precise. The plan has been drawn up by serene and lucid minds. It has taken account of nothing but human truths. Once our city is well started, it goes on growing as a circle round itself.

I am printing and binding each of the five parts separately and housing them as a group inside a box. The booklets will contain interlocking, cyclical imagery that will reinforce the nature of the text while allowing the viewer to lay the books out on a table to join their central images and create a long landscape with no fixed beginning or end. (rudimentary drafts below) 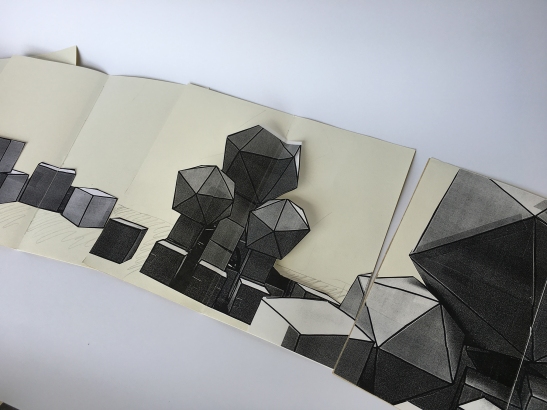 Here is the problem with books, though. Just when you think you know what you are doing, you decide you need to use materials like cement, wood, and glass. This is a book about architecture and urban planning, after all. So now I am on the phone with mold makers and laser cutting aficionados trying to puzzle this project out. Thankfully, there are portions of this book that just need good old fashioned printing, and so I am able to get rolling on that side of things even while I am in the tall grass.